It’s 2017 and certainly this will be a year of numerous changes and optimism for a stronger economy.

We will provide you with timely information and analysis of all changes, allowing you to make necessary adjustments to take full advantage of any new opportunities.

Our promise to you this year is our commitment to provide you with the value of our knowledge and experience through complimentary educational services.

These services will include this Quarterly, as well as, seminars, webinars, and newsletters all designed to allow you to exceed your risk management objectives.

Additionally, our legal team is committed to providing distinguished legal services, including prompt case evaluation and creative, cost-effective resolutions. We will tailor our services to match your needs. Throughout the year, we will be asking you to let us know how we can make your job easier and more efficient.

We value our partnerships with you and the trust you have extended to us. We value your feedback and ideas and strongly invite these influences.

With genuine appreciation for these relationships, on behalf of the firm, I extend to all of you our thanks and well wishes for a healthy and successful New Year! 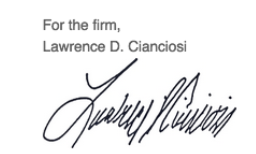 Recently, our office has noticed an uptick in negative responses from the Michigan Unemployment Insurance Agency in response to our subpoenas for unemployment records. It has become a somewhat familiar situation to receive a letter, drafted by a recently-barred assistant attorney general, indicating that our employers are not “chargeable” employers and, thus, not “interested parties” entitled to records. We all know that MCL 418.358 provides a dollar-for-dollar offset to weekly compensation benefits, or lump sum settlements, for amounts paid or payable to an injured worker under the Michigan Employment Security Act. The basic argument put forth by the Attorney General in these terse letters is this:

MCL 421.11 governs the disclosure of information obtained as a result of the administration of the employment security act. Unless there is an exception noted in the statute, this information is confidential and cannot be disclosed or open to public inspection. The Attorney General’s office then quotes the language of the first subsection under that general rule: “information in the commission’s possession that might affect a claim for workers’ compensation under the worker’s disability compensation act . . . shall be available to interested parties as defined in R 421.201 of the Michigan administrative code, regardless of whether the commission is a party to an action or proceeding arising under the act.” That section of the administrative code says that an “interested party” means anyone whose statutory rights or obligations might be affected by the outcome or disposition of the determination, redetermination, or decision. An employer is an “interested party” in connection with a claim for benefits if the employer’s account has been charged or it is possible it will be charged with some portion of the benefits paid or payable; or if the employer is directly involved in a possible ineligibility or disqualification of a claimant. Since the employer is not “chargeable” or potentially “chargeable” it is not an interested party, even for workers’ compensation purposes.

Our office has litigated this issue numerous times in recent history, filing motions and subpoenas commanding the assistant attorneys general responsible for these letters to personally appear before a magistrate and explain why they should be allowed to prejudice our clients and impede the effective administration of the Act. This approach has been very effective thus far, fortunately. Our main argument is that our clients are “interested parties” under the statute and administrative rule as production of unemployment records is required to calculate an employer’s weekly indemnity obligation and accrued benefits. Clearly, by carving out an exception to nondisclosure for workers’ compensation purposes, the legislature intended to allow carriers and employers to effectively utilize the offset provided for under MCL 418.358. If the courts were to read the statute to suggest that only chargeable employers could receive information, then the offset would be artificially narrowed to only a certain subset of employers, creating an obviously absurd result. We will continue to litigate this issue zealously until the Attorney General’s office revisits its policy.

In July 2016, I wrote an article explaining updated overtime regulations under the Fair Labor Standards Act (FLSA). On May 18, 2016, President Obama and Labor Secretary Thomas Perez announced rule changes that were set to take effect on December 1, 2016. These rule changes would have increased the salary level test threshold for determining exemption from overtime pay from $23,660 to $47,476 annually for executive, administrative, and professional employees[1]. The Department of Labor anticipated these changes would have affected 732,000 white-collar, salaried workers and would have transferred between $1,178,000,000 and $1,271,000,000 in average annualized income from employers to employees.

These rule changes were challenged by 21 states and numerous business groups in the US District Court for the Eastern District of Texas. The challengers argued that the Department of Labor disregarded the text of the FLSA by imposing a salary threshold without examining the work tasks performed by employees subject to this change. Judge Amos Mazzant issued an injunction on November 22, 2016 preventing these changes from taking effect until further judicial determination. This injunction preserves the status quo while the court determines the Department of Labor’s authority to make the final rule and the final rule’s validity.

On December 1, 2016, the Department of Labor filed an appeal in the US Court of Appeals for the 5th Circuit. However, it is unlikely that this appeal will be resolved prior to President-elect Trump’s inauguration on January 20, 2017. Labor Secretary nominee, Andrew Puzder, wrote an opinion piece in Forbes that offers insight into his view of these regulations, and if confirmed, Mr. Puzder will likely refuse to defend the regulations in court. If this is the case, the status quo with regards to overtime pay will continue to be maintained. It is plausible that Mr. Puzder’s Labor Department might eventually propose less onerous overtime regulation updates. However, any new regulations would need to be run through a notice and comment period[2].

The timing of this injunction, and the upcoming change in presidential administrations, may present awkwardness for employers who have already increased employee pay, anticipating that the updated regulations would become effective on December 1, 2016. These employers should consider their own business objectives, competitive environment, as well as employee perceptions and morale when considering further adjustments to employee pay.

[2] It would likely take at least a year for a notice and comment period to be conducted, rules to be drafted, and changes to become effective. For example, President Obama’s attempt to update the current overtime regulations began with an executive order in March 2014. A Notice of Proposed Rulemaking (NPRM) was not published by the Labor Department until July 2015, the final rule was not published until May 2016, and the effective date was set for December 2016.

The requirements of nonprofit employers under the Fair Labor Standards Act (FLSA), which primarily concerns employers’ minimum wage and overtime pay obligations, can be confusing given that the FLSA references two types of coverages: (1) enterprise and (2) individual.

Enterprise coverage refers to the FLSA’s application to employees employed by an entity with annual gross sales – or business done – of at least $500,000. Simply, whether this coverage applies and the enterprise is subject to the requirements of the FLSA, depends on the amount of money generated by the enterprise. Importantly, nonprofit charitable organizations are not covered enterprises under the FLSA unless they engage in commercial activities – such as operating a gift shop or providing services for a fee. Income from contributions, membership fees, and donations used in furtherance of charitable activities are not considered in determining whether an organization has met the dollar threshold required for FLSA enterprise coverage. Under this pure enterprise coverage, many entities – including many for-profit businesses – would not be subject to FLSA minimum wage and overtime requirements.

However, employees of a non-covered enterprise may still be covered under the FLSA’s broader, individual protections. Employees, regardless of whether they work for a covered or non-covered enterprise, are entitled the FLSA protections if they are engaged in commerce, engaged in the production of goods for commerce, or are engaged in any closely related process or occupation directly essential to such production. These activities include tasks as innocuous as making a telephone call across state lines, and these tasks are broadly defined under Section 203 of the FLSA as including “trade, commerce, transportation, transmission, or communication among the several States or between any State and any place outside thereof.” This individual protection significantly expands the coverage of the FSLA requirements to cover all manner of business, government, and nonprofit employees regardless of size or income generated.
Therefore, even if a nonprofit entity in not a covered enterprise under the act, its employees may be entitled to FLSA protections if they are engaged in broadly-defined activities in commerce.

Importantly, the FLSA allows individuals to freely volunteer for public service, religious, or humanitarian objectives without the expectation of compensation.

Submitted by Brian Zielinski, brianz@hanbalazar.com.
Winning on the road

Hanba & Lazar recently won a case involving an employee’s work-related travel, and the written decision will hopefully have favorable implications in the future. Magistrate David Williams presided over the case, which involved a Plaintiff who was allowed to drive a company van to and from work each day, and was injured while one his way to Defendant employer’s warehouse one morning. Although Plaintiff was already receiving weekly benefits from his first party auto no fault carrier, he filed an action seeking to have his injury declared work-related. Plaintiff was never paid mileage for work-related travel, and he needed to start his day at Defendant’s home location in order to clock in. Further, Plaintiff testified he could not travel directly to any job site that morning, because he needed to refresh the equipment in his van. Magistrate Williams held that this case fell within the general rule indicating that injuries occurring while an employee is traveling to or from work are not compensable under the Worker’s Compensation Act, because Plaintiff could not develop any facts supporting a contrary conclusion. As a result, Plaintiff’s first party auto no fault carrier remains responsible for paying Plaintiff benefits. .

Submitted by Jonathan Rea, jrea@hanbalazar.com.
Stopping discrimination before it happens

Knowing who to hire has always been one of the most difficult decisions facing employers. Knowing what legal protections apply to certain segments of the population can be an equally challenging aspect of the hiring process. Title VII is the well-known federal law that prohibits employment discrimination based on “race, color, religion, sex, or national origin.” However, gender identity and sexual orientation are not explicitly included in these protections. Similarly, Michigan’s Elliott-Larsen Civil Rights Act does not offer employment protection based on gender identity or sexual orientation. The State of Michigan itself has outlawed such discrimination as it applies to public employment, as have the counties of Wayne, Washtenaw, and Ingham. However, there is still no applicable state-wide law that offers any such protections with regard to private employment. Despite the lack of legal protections for gender identity and sexual orientation within the private sector, employers should be very careful of their actions. The Equal Employment Opportunity Commission, who is in charge of enforcing Title VII’s protections, may be looking for test cases which they can bring to court in an attempt to expand Title VII’s reach. Overall, employers would do well to steer clear of anything that could be viewed as discrimination based on gender identity and sexual orientation.

Please leave us comments/questions. If there is a topic that you would like to see discussed in this Quarterly, please let us know. Comments and questions can be directed to Stephen Cooley at scooley@hanbalazar.com.

Sorry, the comment form is closed at this time.